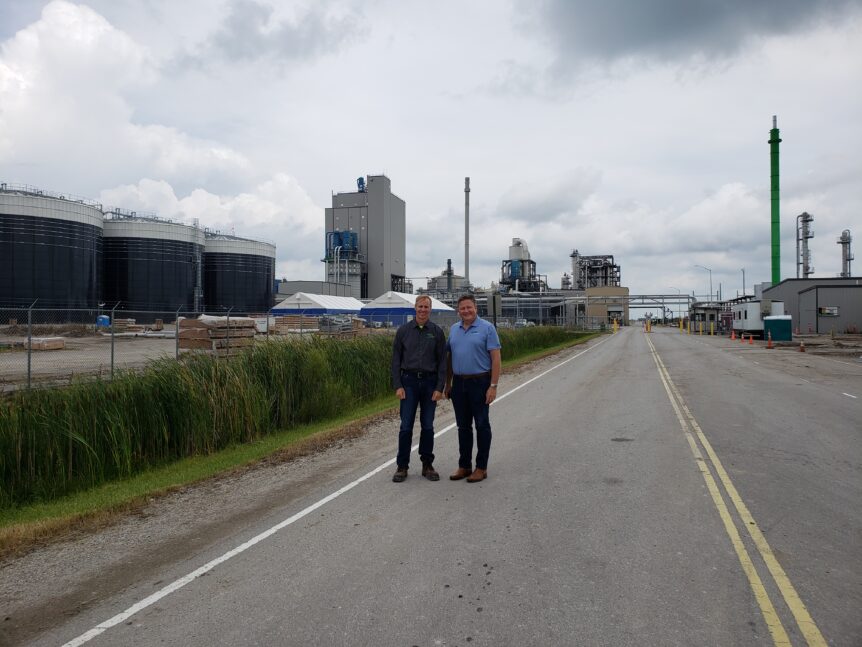 The public is welcome to attend an open house on July 13 at the Indian Creek Country Club from 5:30-6:30 to learn more about Verbio.

Over the next 30 days, the Verbio plant at the west edge of Nevada will begin to fire up. “We will begin to start up the renewable natural gas plant using corn stover in July. The start-up process will last through October,” said Greg Faith, President of Verbio Nevada LLC. Verbio took over the plant from DuPont in January of 2019, and since that time, the company has focused efforts on constructing its Renewable Natural Gas (RNG) facility. “Much of the RNG process required the installation of new equipment,” Faith said. Also involved in the process was the work to annex land to the northwest of the plant. This annexation happened recently with Nevada City Council approval. Ron DeJongh, President of Verbio Farm Services, explained why the annexation was important.

“The new 103-acre site will allow Verbio to load ethanol and other products on the mainline Union Pacific track, and Verbio intends to add track capacity for the purpose of transloading multiple other products shipped into central Iowa via rail and distributed by truck. The excellent rail and road infrastructure provides many opportunities for growth and jobs,” DeJongh said.

Verbio plans to add rail access during a second phase of construction. DeJongh and Faith also noted the importance of having all Verbio’s property in the same jurisdiction. “We value our relationship with the City of Nevada and appreciate the many services they provide such as city administration, fire, police, and emergency services. For operating purposes, it is much better to ensure services are consistent between the two properties.”

Faith said the Nevada Verbio facility will have 50 full-time positions, 33 at the plant and 17 as Farm Service employees. “Job responsibilities (among its workforce) are diverse. We’ll have plant management, operations management, engineering staff, maintenance, operators, material handlers, agronomy and farm services,” he said.

“We are in construction of our phase II expansion that will result in production of ethanol, additional RNG, processing of corn oil, nitrogen fertilizer and value-added byproducts. When Phase II is complete, we will add an additional 48 full-time positions with many of the same job responsibilities as in phase I,” said Faith.

To help residents better understand how the Verbio plant will run, we asked Faith and DeJongh to answer some basic questions about the operation.

What is it you will be making and what is the process for that product?

Their answer: We will produce Renewable Natural Gas and humus. RNG, using anerobic digestion technology will be upgraded to meet pipeline natural gas standards and injected into an onsite natural gas distribution pipeline for eventual use as compressed natural gas (CNG) or Liquified natural gas (LNG) vehicle fuel. Humus is a value-added lignin and nutrient-rich soil amendment, similar to peat moss or compost, which will be principally returned to feedstock suppliers and spread on farmland to replace the agronomic value of the crop residue that was harvested and as a natural organically created fertilizer enhancement. Our process does not create any wastewater.

What will be used as input for the process?

Their answer: When starting up the input/feedstock for the process will be corn stover.

How much water will be used in this process?

Their answer: The process will use approximately 45 million gallons per year. A typical 60-million-gallon ethanol plant uses about 200 million gallons per year. Our technology is designed to reuse all the water that is brought into the plant, except for the water that is evaporated through the cooling tower and dryer, resulting in improved operational sustainability.

What are the flares and big green stack for? How often will this burn? What will it smell like?

Their answer: The big green stack is for our regenerative thermal oxidizer, which will eliminate greater than 98 percent of odor compounds. The flares (silver stacks) are required if the downstream process is shut down. The flares’ purpose is to oxidize greater than 98 percent of all odor components. Odor from the flares and green stack will be non-existent, based on the manufacturer’s warranty. There will be no smell detectable from the flares or green stack outside the premises. The flare will burn during start-up and during what we anticipate being very infrequent, if any, interruptions of the downstream processes. Our goal is to run the flares minimally, because we lose RNG when they are running. When the flares are burning it will be visible as a flickering light during the night. There will not be any visible emission from the green stack other than water vapor.

How big will the bale storage be? Where will it be located? What will be done for fire suppression, and is this safe for surrounding businesses and properties?

Their answer: There will be a permanent covered bale storage site located on the northern part of our premises, with a maximum of 30,000 tons. The intention is to fill it during the harvest period with corn stover and then empty it during the following months. This location will be monitored 24 hours/7 days a week/365 days per year, allowing for immediate response if there is an incident. We will have some additional bale storage at satellite locations. The city of Nevada’s Fire Chief will review and approve the installation and operation of appropriate fire suppression.

Faith and DeJongh say Verbio has a long track record of successful operation dating back over 20 years. They are excited to bring Verbio into operation in the City of Nevada.

“We have fulfilled and are following all state and federal requirements, as well as meeting specific zoning regulations. We have an excellent, transparent relationship with state and federal officials and will continue to work with them,” Faith said.

“We also believe in investing in those communities where we are located to intentionally evaluate ways to improve overall quality of life,” DeJongh added. To show this commitment, Verbio has already approved a request for funding to support the Nevada Fieldhouse project, and Verbio has hosted the annual 9/11 Memorial Stair Climb event for emergency responders for the past several years.

Faith and DeJongh say Nevada is a great location for this company. Access to an integrated utility infrastructure was a critical feature of the Nevada site, along with readily available feedstock. The two also point to the availability of educational resources, including DMACC and Iowa State University, as big benefits to being in Nevada and Story County.

“Nevada is centrally located in the Midwest, and Nevada has great people. We really enjoy working with the community,” Faith said. “We appreciate the support and leadership of the City of Nevada and look forward to further developing Nevada’s image and commitment to agriculturally-based renewable energy.”

In order to help all community members better understand Verbio’s operations and plans, Faith and DeJongh have announced an open house on July 13 at the Indian Creek Country Club from 5:30-6:30 p.m. Everyone is invited and encouraged to attend to hear more about Verbio, its processes and its future plans.

“This is a very exciting time for our company, suppliers and employees, and we hope the community will share in our excitement for the future,” Faith said.