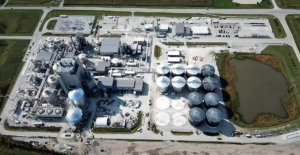 Today, the first US industrial scale renewable natural gas facility using agricultural residues as its feedstock began production operations in Nevada, Iowa. Following 2 1/2 years of construction and transformation of VERBIO’s Nevada plant, Greg Faith, President and General Manager announced, “Our biorefinery facility is now injecting pipeline quality natural gas into Alliant Energy’s gas distribution system for sale, nationally, to CNG and LNG transportation customers. This is a great day for our company, for our employees and for our partners in agriculture. We greatly appreciate the support we have received from the City of Nevada, the Iowa Economic Development Authority, the Des Moines Area Community College, Alliant Energy and many others – their support has been critical to our project’s success.”

the time Claus Sauter, Founder and CEO of VERBIO AG, said, “I am delighted to announce VERBIO’s first major investment.” He recently stated, “Our team of German engineers, working with their US counterparts and our construction partners have positioned the company to achieve substantial, and more importantly, sustainable long-term growth by utilizing VERBIO’s revolutionary and proven technology in the area of renewable gas production from agricultural residues, such as corn stover.”

With the commissioning of VERBIO Nevada’s RNG production, VERBIO has completed one of the key milestones of its’ initial strategic vision tied to its’ expansion into the US market. The Nevada plant will produce 7 million ethanol gallons equivalent (EGE) of RNG with the completion of Phase I; upon completion of Phase II in the 4th quarter of 2022, the site will begin operating as a biorefinery, producing 19 million (EGE) of RNG and 60 million gallons of corn-based ethanol. The integration of RNG and ethanol production, unique to VERBIO, incorporates advanced operational technology as currently practiced at the company’s facilities in Germany.
Since the passage of the Renewable Fuel Standard (RFS) legislation in 2005 and as amended in 2007, Iowa has become a leader in the production of ethanol and biodiesel. The emergence of VERBIO Nevada adds RNG to the state’s renewable energy portfolio and builds on the partnership between agriculture and renewable energy. “VERBIO is a first-class company, and I’m pleased they chose to invest in Iowa for this new biorefinery facility,” said Debi Durham, executive director of the Iowa Economic Development Authority and Iowa Finance Authority. “This important renewable energy project exemplifies our economic development strategy in Iowa, which is about innovation and attracting highly skilled jobs that will raise the standard of living and create wealth for our state.”

Following the formal commissioning announcement, Sauter went on to note that, “While the RFS has been a great success, the portion from the Advanced Biofuels category related to Cellulosic Biofuels has greatly underperformed. By 2022, the RFS envisioned 16.0 billion gallons of biofuels being produced from this category. However, production to date has not exceeded 0.6 billion gallons, with over 80 percent of this being from landfill and wastewater treatment facilities and only a relatively small amount from renewable agricultural residues and cellulosic sources (i.e., field residues and animal waste). With the right policies, there is a tremendous untapped source of agricultural residue feedstock available for renewable fuels.”

“I’m excited to welcome VERBIO to Iowa. This is a huge investment in Nevada and will have a tremendous impact on communities around the state. As stewards of the land, Iowa has an excellent talent pool. On top of that, it’s a great place to work and live,” Senator Grassley (R-IA) said. “Iowa continues to be a leader and advocate for renewable fuels; this new facility will use cutting edge technology to bring renewable energy nationwide.” VERBIO has worked closely with Senator Grassley and other members of Iowa congressional delegation. VERBIO looks forward to working with these members of Congress on additional policy and regulatory advancements in the coming years.

VERBIO Nevada Biorefinery, will build on VERBIO AG’s long track record of successful renewable energy operations dating back over 20 years. The company is committed to operating its plants, safely and in an environmentally sensitive manner. Further, the company expects to make periodic announcements about the plant’s overall performance, as part of a continuing commitment to validate the viability and benefits of renewable fuels.

About VERBIO Vereinigte BioEnergie AG
VERBIO Vereinigte BioEnergie AG is one of the leading independent bioenergy manufacturers, and is also the only large-scale producer of biodiesel, bioethanol and biomethane in Europe. The Group has approximately 800 employees at its locations in Germany, India, the USA, Canada, Poland, and Hungary. VERBIO concentrates on the use of internally developed innovative and efficient energy-saving production processes. VERBIO’s biofuels achieve CO2 savings of up to 90 percent compared to petrol or diesel. In addition, VERBIO manufactures biofertilizer and animal feed for agricultural use as well as high-value raw materials for the pharmaceutical, cosmetic and foodstuff industries. With its innovative processes and highly efficient production plants, VERBIO is a technology leader in the European biofuels market. The VERBIO share (ISIN DE000A0JL9W6/WKN A0JL9W) has been listed in the prime standard segment of the Frankfurt Stock Exchange since October 2006.

More information can be found at www.verbio.de/en

About VERBIO North America Holdings Corporation
VERBIO North America Holdings Corporation (VNAH), with headquarters in Livonia, Michigan, is developing and will own, operate and finance multiple RNG and ethanol plants in the United States using VERBIO’s technology and financing. RNG produced by VERBIO Nevada will be injected into the natural gas distribution/transmission system and sold to CNG/LNG filling stations or fleet operators for use as transportation fuel. Ethanol production is scheduled to become operational in late 2022.The formation of VERBIO NA Holdings, Corp, became effective July 1, 2021.The corporation’s subsidiaries include VERBIO Nevada, LLC, VERBIO North America, LLC and VERBIO Agriculture, LLC. More information can be found at www.verbio.us
# # #